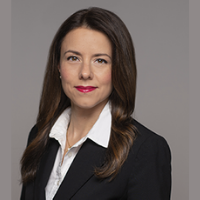 Katherine Mayo is an associate with the Locks Law Firm and works out of the firm’s Manhattan office. She has dedicated her career to fighting for the rights of individuals, laborers, and communities that have been injured by defective products, exposure to toxins, environmental contamination, and other negligent conduct. Additionally, she has significant experience representing victims of traumatic brain injuries (TBI), spinal injuries, and chronic pain.

Katherine’s fierce determination to secure the maximum recovery possible for her clients combined with her analytical acumen, skillful communication inside and outside of the courtroom, scientific aptitude, and compassionate nature makes her a powerful and trusted advocate.

In her free time, Katherine appreciates film, theater, and the golden age of television. She is likewise a music lover, her taste spanning a wide range of genres, from rock and hip-hop to opera and avant-garde music. Katherine was born and raised in Upstate New York, and she regularly likes to escape the city with her husband to spend time with family. Their Australian Shepherd, Bobby, is also especially fond of their weekend escapes to the country.